Arq Backup 5 is tool made to back up your Windows or Mac PC locally or to various online storage services. This article is an Arq Backup Review of version 5.7.23 on a Windows 10 PC.

Arq Backup is a tool that lets you back up all your computers to various online storage services, to your internal disks, to a NAS, or to external hard drives. Arq doesn’t provide this backup storage, it lets you use Amazon S3, Dropbox, Google Drive, etc. Technically Arq is excellent, doing compressed, encrypted, deduplicated backups that are small and secure. Arq on Windows has a quirky user interface that works fine, but could use some work. It really seems like it was designed and built by an engineer.

Overall Arq is a technically excellent piece of backup software, with a few quirks that could be improved. The user interface, bugs, and lack of documentation are the main reason I chose not to use it as my main backup tool. However it would be a good choice for many people.

Arq describes itself as a tool that “Backs up all your computers. Simple. Awesome.”.  Some of the major features are:

Arq has a few things that could do with improvement:

Compared with CrashPlan, I find Arq more difficult to use and less capable. However Arq has one major advantage over CrashPlan – when you plug an external drive used for backups into your PC CrashPlan validates all the data on it, which can take many hours for large backups. That means CrashPlan is fine for online backups, but isn’t really suitable for backing up to external drives.

Arq isn’t particularly difficult to use, but neither is it particularly easy. Having to provision backup storage separately from the backup tool would confuse many people. Setting up Amazon S3 and IAM users would baffle anyone who’s not an experienced or expert computer user.

Putting aside setting the backup storage destinations, the program could be used by anyone who considers themselves “pretty good with computers”. I know that if my 65 year old parents tried to use Arq for backups they’d be completely stumped.

The poor documentation doesn’t help with ease of use.

There’s a number of areas where the Arq user interface could be improved:

Let’s walk through the major parts of the Arq user interface.

This first screen shows the initial view when you install the software. This lets you set up your first backup destination. 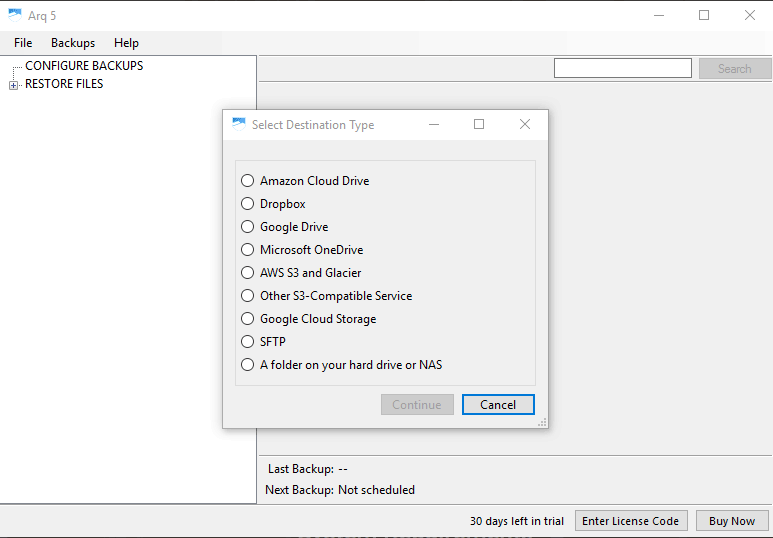 If your destination is an S3 bucket you need to enter your access and secret keys, then select or create your bucket. Arq links to a brief web page that shows you how to set up your IAM user, but it doesn’t give a lot of context about setting up an AWS account.

You can edit your destination if you want to use IA class storage, schedule your backups, schedule validation, or do a few other things. 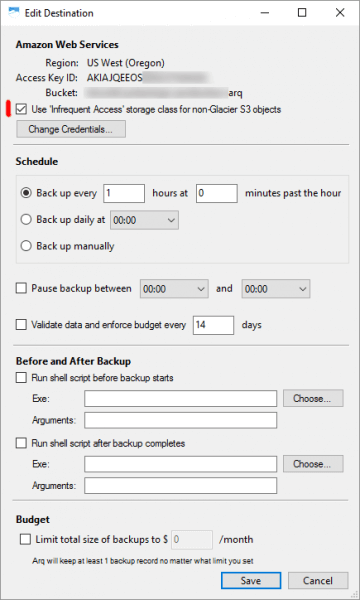 If your destination is a folder you get similar options. 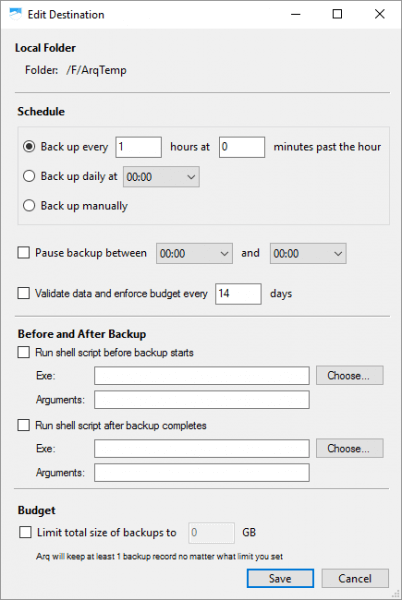 Once destinations are set up you can see where to, and when they’re scheduled to back up.

Once the destination is set up you can configure what you want to set up. If you want to make multiple selections, or remove subfolders, that has to be done later. 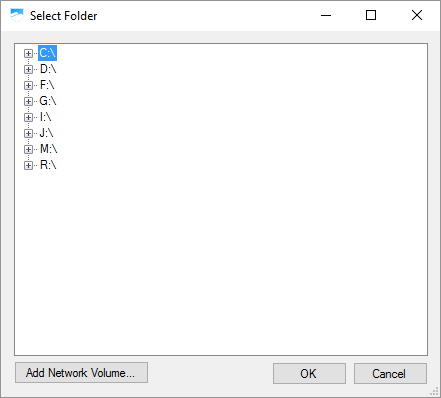 Now that a folder is added you can edit the selection, including deselecting subfolders and files you don’t want backed up. 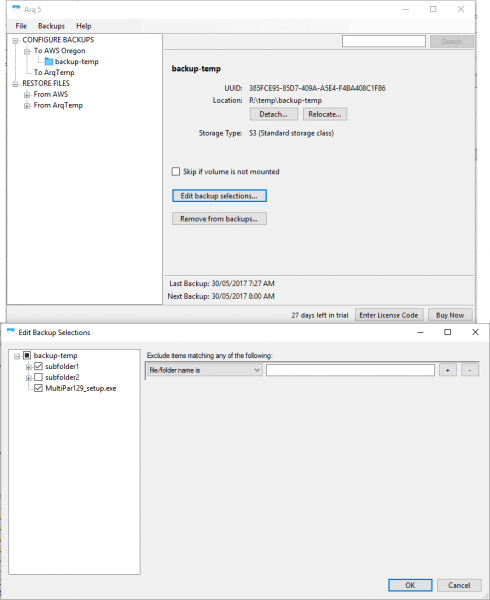 This shows the main screen when you run Arq, after its configured. You can see you can edit backup selections, or do advanced functions like detaching or relocating backups. 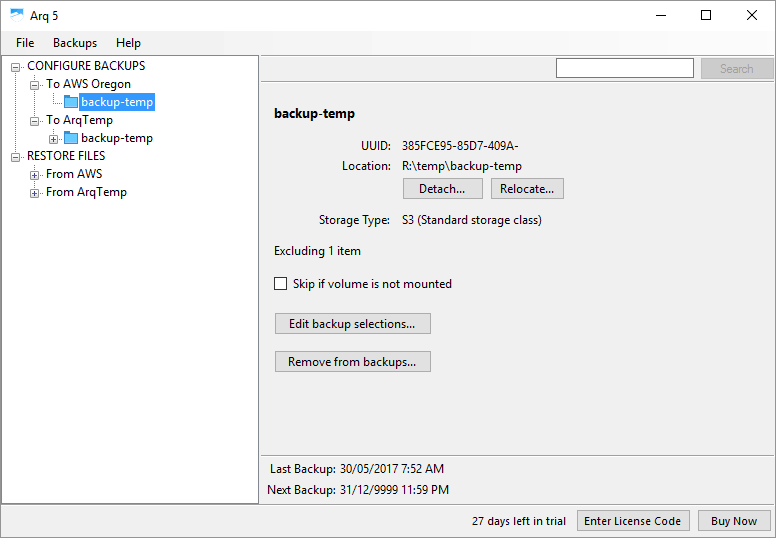 Restoring files is relatively simple. Simply navigate the tree, select the files or folders you want restored, and click restore. 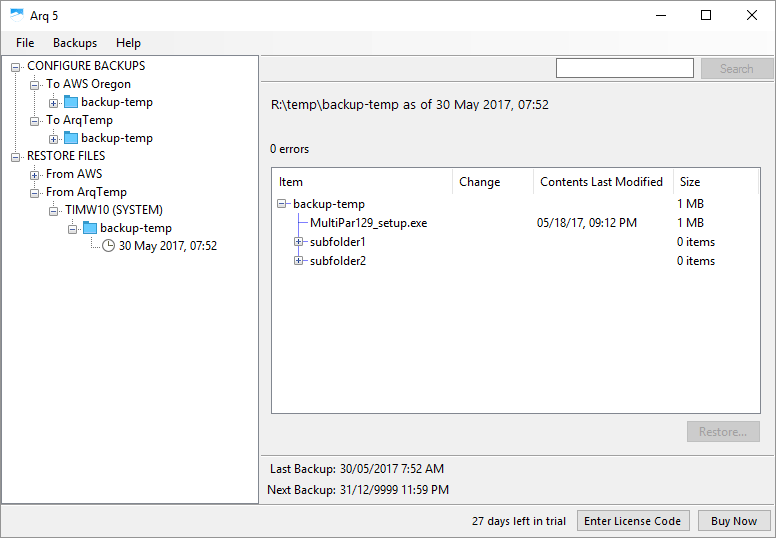 Backups of large raw files from my internal hard disk to an internal SSD went at around 22MB/sec on average, with 35% CPU usage on my i7-2600K CPU. Backups of large virtual machine files was a little faster at 25MB/sec. Given the drive can read over 100MB/sec and there was plenty of CPU available this is underwhelming performance, though not awful. A 300GB backup took around 4-5 hours to complete. Other backup software tested averaged 45MB/sec for small file backup and 110MB/sec for large file backup.

Validation of backups was quite slow. I actually gave up waiting for my 300GB backup to validate. The validate process appears to be single threaded, and the disk sits on 7% utilization according to the windows task manager

This backup performance is acceptable, but not near the best available.

I did a test restore from Amazon S3 using a brand new virtual machine, and from disk to a different PC. Both restores were quick and easy.

Arq Backup 5 is a solid backup program. It has a slightly quirky interface that’s effective but has plenty of room for improvement. Arq seems to be aimed at scheduled backups to online storage or internal disks, so regular interaction probably isn’t expected. Backing up to external disks works, but isn’t as efficient as it could be as backups can’t be run in parallel or queued. Backup performance is acceptable, but it would benefit from some performance work.

In my opinion Arq is more suited for experienced computer users than for beginners. Anyone who doesn’t consider themselves a computer expert would struggle.